In-motion train weighing in the UAE 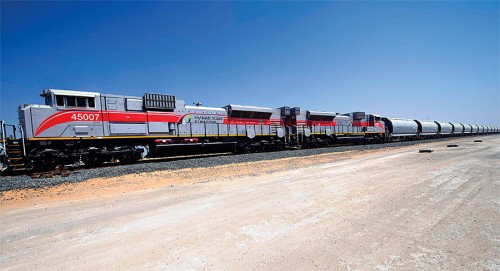 The customer Al Hosn Gas aims to develop and operate the Shah Field utilising the highest engineering and maintenance standards. Primarily involved in sour gas processing the Shah site will extract, process and export sulphur from the sour gas reservoirs.

The robust and easy to use weighing system is situated at the rail loading facility. At this facility the liquid sulphur is converted into solid granules and the weighed goods are then transported to a sulphur handling terminal in Ruwais via Etihad Rail. Close to 3 million tonnes of sulphur is expected to be produced at the Shah site each year, with the sulphur itself being exported to fertiliser plants throughout the world.

The reason for in-motion weighing

The primary application for the train weighing system is to “check weigh” wagons that show a vehicle imbalance. The loading of the wagons can take up to four hours and previously if a vehicle imbalance was identified the entire train would have been sent back to the rail loading facility to be reweighed and the load adjusted. The installation of the Portable Train Weigher (PTW) will solely weigh wagons shown to have an imbalance/incorrect weights thus providing sufficient time and cost savings.

The PTW1 HD is an in-motion train weighing system that weights trains at speeds up to 5km/h. The system has accuracies of +/- 2-3% dependent on site conditions (+/-1% in ideal conditions) and can provide individual wheel, axle and wagon weights. The total wagon weight of the rail vehicle’s when filled will be 130 tonnes and the PTW1 HD with its 40 tonne axle capacity is more than capable for long term reliable operation and accurate check weighing. The PTW1 HD operates via our in-house developed digital indicator unit with the weighing data outputted via a simple printout or exported to a USB for further more in-depth reporting. The main advantage of the portable weighing system is its robust characteristics and ability to operate in harsh environments.

For more information on the granulated sulphur project please view the below video: