Trains need to be weighed but how? 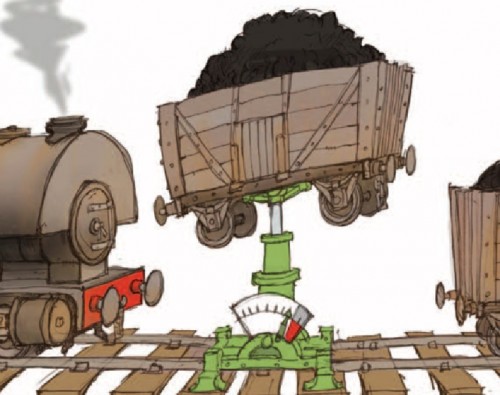 This was the question posed as a Coffee Time Challenge in Eureka magazine a few years ago.

There are a variety of problems when needing to understand the weight of trains especially freight trains such as:

The need to accurately understand the weight of trains is primarily for safety reasons, to ensure there is no damage to the rails or worse a train coming off the rails. Another important reason to weigh trains is for e-commerce purposes and understanding the value of the precious commodity transported such as coal, grain, sand or stone. Accurate weighments ultimately allows those that are transporting the goods the peace of mind that they are accurately transporting the correct amount in a safe and accurate manner.

The challenge posed in Eureka magazine was:

If there is a suspected or potential problem with the weight of a vehicle, how would you weigh the wagon when not in the vicinity of a weighbridge?

This is a challenge as we all know that potential problems can result in higher operating costs due to the importance of maintaining schedules within the rail industry and that the strive for efficiency paramount. Also if there is a potential issue it’s unlikely that the train will be able to move to a fixed installation. The issue with a fixed installation is that the modifications to the track are permanent, which if used only once would be uneconomical, time consuming to install and very complex.

The solution is to provide a system that is quick and simple to install and which can accurately weigh wagons by axle or as a total vehicle such as our in-motion train weighing systems (PTW1 and PTW1 HD). Our Weighwell PTW1 and PTW1 HD can weigh the train in-motion and are portable meaning that within 15 minutes you can start weighing wagons. This is important if you need your train back onto the railway infrastructure whether that be on a national rail network or a private network moving heavy minerals and material at steelworks, power stations, quarries or mine’s.